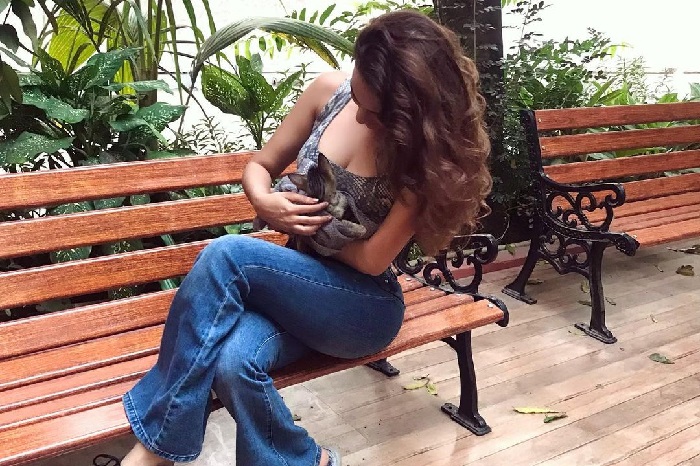 Buying animals of a specific breed has become normal in our society. But lately, there has been a rise in the rescue and adoption of stray pets from shelters or the streets. Bollywood celebrities who are ardent animal lovers are now leading this example by making them a part of their family. Our very gorgeous Seerat Kapoor chose to love and be loved by the sweetest Indie kitten.

Seerat Kapoor recently adopted a Toyger kitten which has silver striped coats, reminiscent of the tiger’s. The actress met this adorable cat underneath a car, near her. She rescued the cat, fed her and took the little kitten to the vet for her routine medical check ups.

Seerat Kapoor adopted her little furry friend on developing a strong connection. Animals have a unique way of building a special place in our hearts. Seerat couldn’t help but decide to look after her, there on. The adopted kitten is now warmly welcomed as one of Seerat Kapoor’s family members and Seerat lovingly names her “Shea” which means majestic.

Seerat Kapoor’s lovely gesture sends a message to us that even if we cannot adopt an animal, we can help spread the word so that these precious souls are able to find their forever homes. Be a voice for those who don’t have one. You’ll be amazed at how little it takes to make a significant difference! Always remember to #AdoptNotShop.

On the professional front, Seerat Kapoor debuted in Tollywood with the film “Run Raja Run” in 2014 and has since acted in films such as “Tiger,” “Columbus,” “Raju Gari Gadha 2,” “Maa Vintha Gadha Vinuma,” “Krishna and His Leela,” and many others. Seerat has acclaimed a huge number of fanbase post her song Slow Slow. Fans are eagerly expecting Seerat Kapoor’s Bollywood debut in Maarrich, with renowned actor Naseeruddin Shah and the handsome Tusshar Kapoor. The actress will star in Dil Raju’s forthcoming Telugu film as a leading lady. Aside from that, the actress has already received interesting projects from leading Bollywood filmmakers and we can’t wait to see what Seerat Kapoor signs next. Details to be announced soon.

Jaitv Feed - November 6, 2021
Shivika Diwan is all set to pave her way in the industry with her outstanding acting and persona. The actress who is a bundle...

E Desk - June 14, 2020
Actor Sushant Singh Rajput was found hanging at his residence in Bandra, Mumbai. According to report, his domestic help noticed the actor hanging from...

Social Desk - September 22, 2022
Anjali Arora is a fashion model, Dancer and Social Media Influencer. She is best known for her lip-syncs and comedy videos that she posts...

Giorgia Andriani takes us back to memory lane to how people took advantage of...

Jaitv Feed - August 1, 2022
Giorgia Andriani, who is now one of the most loved celebrities in town, has always amazed the audience with her stunning and endeavoring personality....
Facebook Instagram Koo Telegram Twitter
© JaiTV
MORE STORIES