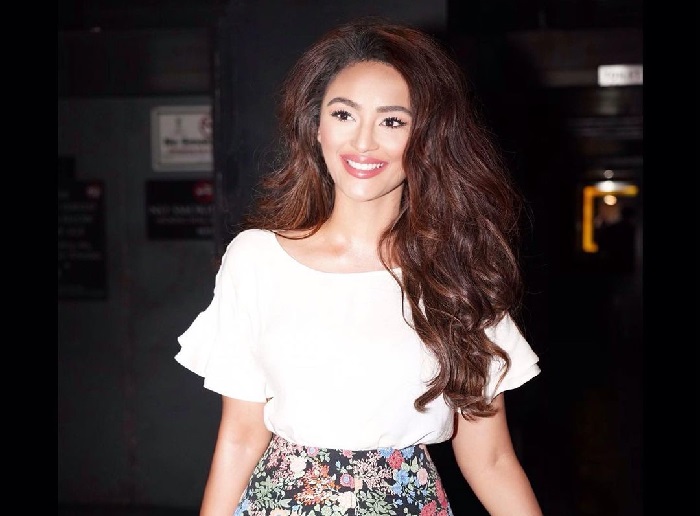 Seerat Kapoor who is soon going to make a Bollywood debut with “Maarrich” is busy with back to back shoots for more than a couple of projects juggling at same time.Seerat Kapoor who is known for her glamorous avatar and her outstanding persona has gained a place in the hearts of the audience, Seerat Kapoor’s fans are very excited for her recently most talk film under Dil Raju’sProduction.

Seerat Kapoor has paved her way to Tollywood and received a huge response for her outstanding dedication and work. From being an assistant choreographer in the film “Rockstar” to making her huge in her recent Tollywood film “Krishna and his Leela” Seerat has come a long way. Seerat Kapoor recently shared a video the BTS from her Vanity getting ready for her next. The silver eye make up is giving her the look of the goddess, She captioned the video saying, ” How much time is too much time on the vanity chair?”.

Indeed we can say that the actress looks very happy and elegant as she smiles in the video.

On the work front, Seerat Kapoor’s grand Bollywood debut in the upcoming film “Maarich” along with the veteran actor Naseeruddin Shah and the handsome Tusshar Kapoor is highly awaited by fans. The film “Maarrich” is going to be produced under the banner of Tusshar Entertainments.

Social Desk - June 9, 2017
Deepika Padukone is a popular Indian film actress and model. She gained popularity with films like Om Shanti Om and Bajirao Mastani. She is...

Social Desk - October 27, 2014
Sudhir Chaudhary is an Indian Journalist, News Anchor and Editor. He is one of the most popular Hindi TV journalists of India. Currently, he...

Social Desk - March 27, 2020
Prashant Patel Umrao is an Delhi based Advocate, Public Speaker, Writer and a social activist, who fought a year-long battle to reverse the Delhi...