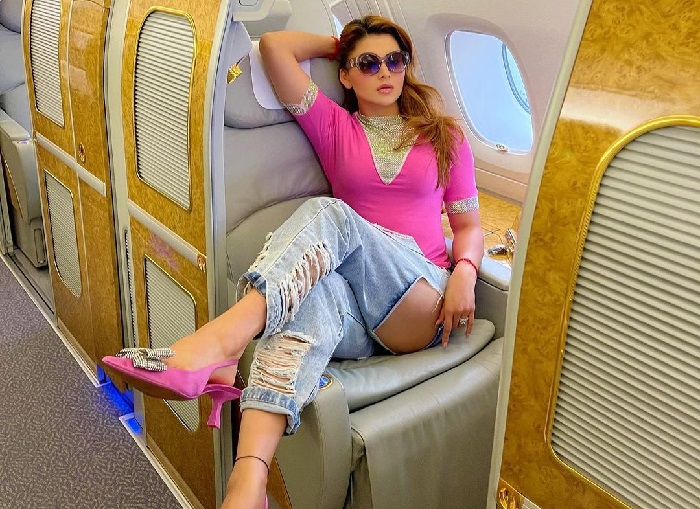 Urvashi is currently the talk of the town because of her appearance and making India proud at each level. She’s the most followed Asian actress on social media. She is one of the most loved celebrities globally. The actress, who always slays the red carpet with her hot, scintillating looks, has once again made our hearts skip a beat with her ravishing looks while she was spotted at the Mumbai airport leaving for the promotions of her Tamil debut multilingual film, “The Legend”.

Recently, Urvashi was spotted at the Mumbai airport donning a pink top with a silver shimmery neckline and  borders, paired with blue baggy highly ripped denim jeans, that flaunted her toned and sensuous legs. To add that glam to her look, Urvashi paired it up with brown sunglasses and left her long and bouncy tresses open. To complete the look, she went with a very subtle makeup look and a nude lip tint. And she rounded the entire look off with pink pointed-toe brooch heels and silver bows attached to them. Definitely, the actress grabbed the entire limelight, as she posed for the papparazi, with all smiles.

Not only this, the actress hooked on to the hook step of her song PO PO PO in a very creative way, as she was seen shaking her legs in her luxurious business class compartment as she was on the flight heading to promote her Pan Indian film worldwide. The video is making the rounds over the internet as her fans are loving it and her sensuous moves are just keeping us hooked on the song.

As soon as the song was released, Urvashi was showered with appreciation and love. Fans went crazy, looking at this amazing duo and their power pack performance. Her stunning dance moves and gracious curves are just winning the hearts of the audience, and the admirers were amazed to see Urvashi’s energetic performance in the song.

We can’t wait to see the actress on screen in her multilingual movie, which has a massive budget of Rs 200 crore, Urvashi is going to portray a microbiologist and an IITian in the movie, and the movie will also convey a message about the educational system.

On the work front, Urvashi was recently appointed as the first global brand ambassador for the Smile Train Foundation. The actress is making sure to keep her admirers proud and engaged with her daily life activities and global achievements.

Jaitv Feed - September 3, 2022
Urvashi Rautela who is Bollywood and one of the youngest superstar has always amazed the audience with her stellar performance and looks and has...

Social Desk - September 30, 2016
Rahul Gandhi is an Indian politician and a member of parliament from Wayanad, Kerala, India in Loksabha. He served as the president of the...

Larissa Bonesi opened up about her hard work from being just a girl with...

Jaitv Feed - November 6, 2021
The sizzling Brazilian model turned actress, Larissa Bonesi has been candy to the eye. She started her career back in 2011, in the super...
Facebook Instagram Koo Telegram Twitter
© JaiTV
MORE STORIES