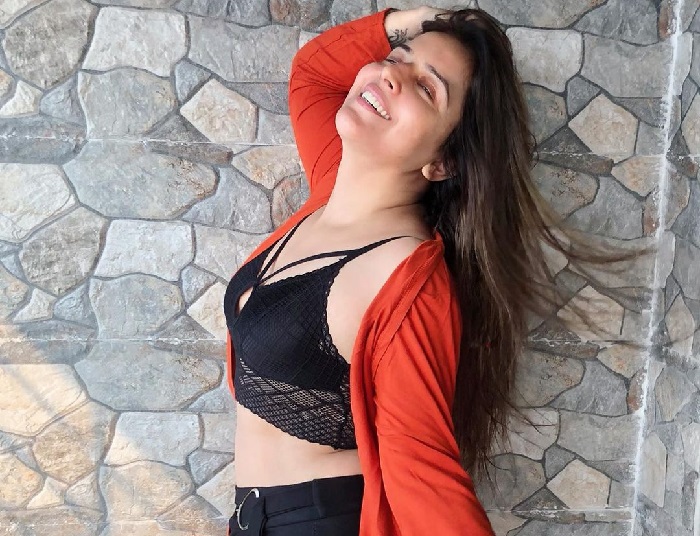 Shivika Diwan is all set to pave her way in the industry with her outstanding acting and persona. The actress who is a bundle of joy surely knows how to increase the oomph factor by her outstanding fashion sense. Fashion plays a very pivotal role for all the Bollywood divas. Shivika is all to immerse herself into the fashion game.

Shivika dropped a few hot pictures from her recent photoshoot, which looked very captivating to our eyes. The actress looked fresh and elegant where she made fans notice her dazzling smile and pose.

Shivika opted for a black bralette with black net lace attached to it, she opted to wear a high-end body-hugging skirt with a belt attached to it.

She rounded off the outfit with a red long sleeves shrug. Shivika chose to keep her makeup very subtle with hair open around that accentuated her entire look.

Shivika was indeed looking very hot, as she raised the hotness of the gram with her look. Fans were really awestruck with her look and rushed to her comments sections to show their love.

On the work front, Shivika who has acclaimed herself in Bhojpuri and Telugu industry with various movies like ‘Oo Pe Ku Ha’ in the Telegu industry she also made her Bhojpuri debut with the film ‘Challenge’ alongside Pawan Singh. She will be also seen in the Bhojpuri films like ‘Damad Ji Kiraye Par Hai’, “Kahani”, and “Paheli” opposite Yash Kumar along with that she was also seen in ‘Parvarish’ opposite Ritesh Pandey, ‘Khiladi’ alongside Khesari Lal Yadav. The actress has many more projects under the pipeline which will be announced soon.

Jyoti Saxena Says, Bollywood Has Once Again Lived Up To It’s Charm and Brahmāstra...

Social Desk - July 19, 2020
Pooja Bhatt is an Indian film actress, director, voice over artist, model and film maker. She is the recipient of several accolades, including two...

Social Desk - October 24, 2017
Praniti Shinde is an Indian Politician and Member of Maharashtra Legislative Assembly, elected from Solapur City Central. She is one of the most young...

Jaitv Feed - January 20, 2021
Bollywood superstar Urvashi Rautela never misses a chance to surprise her fans. Urvashi Rautela is recently in a new for her new announcement of...

Jaitv Feed - June 6, 2021
Bollywood’s youngest superstar Urvashi Rautela is a real fashionista and has aces all her styles and loves experimenting with the trends which leaves her...
Facebook Instagram Koo Telegram Twitter
© JaiTV
MORE STORIES