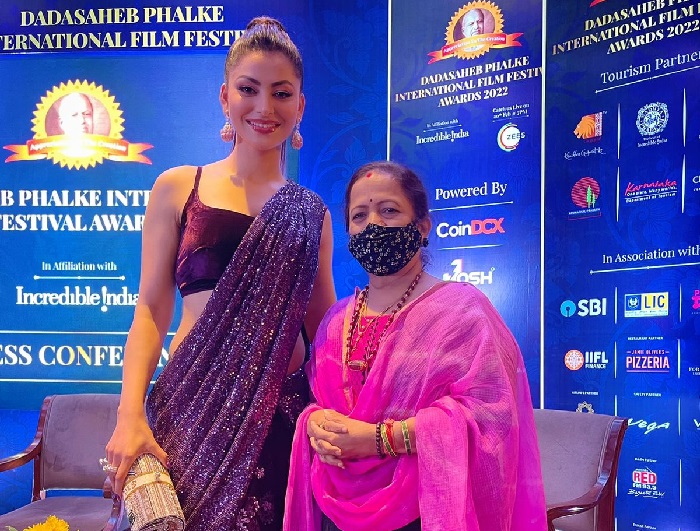 Urvashi Rautela who is a Bollywood youngest superstar has paved her way in the industry because of her hard work and dedication. Urvashi is one of those personalities that has made India proud of her achievements and great deeds. With her breathtaking look and extraordinary appeal, this international actress has always fascinated all of her lovers. Their talents and personality are enough to show their worth in the industry. One such name of our industry is Urvashi Rautela. She is one of those Bollywood actresses who have achieved a name for herself not only nationally but internationally making India proud. Urvashi recently graced her presence as the panelist at the Dada Saheb International wards 2022.

Urvashi looked stunning as she walked the red carpet at the award ceremony where she was selected as an official jury member of the Dada Saheb Phalke International Film Festival Awards 2022. Urvashi was one of the youngest panelists at the event. The actress shared this adorable video on her social media where she is seen appreciated by the Mayor of Mumbai Kishori Pednekar. The Mayor thanked superstar Urvashi Rautela‘s parents for giving her great sanskars. The Mayor also proudly called her the “Diamond of India” and greeted and congratulated her for creating history and making India proud. Definitely, we can say that she is one of those beauties who have no way of stopping and making India and everyone proud of each and every stage, she is truly that precious Diamond of India whom we cannot thank for marking India’s name worldwide.

For the event Urvashi looked stunning as always which had made our heartthrob as the actress wore a dark purple shimmer saree paired along with a sleeveless velvet blouse, flaunting her toned body made the actress look very enchanting, she went for minimal makeup along with winged eyeliner and nude lip shade along with her tresses tied up in a ponytail with long earrings and bracelet adding the perfect accessorized look to it. With a perfect round hand clutch adding ultimate shine to her entire look, definitely we can say that Urvashi looked no less than a goddess in this ensemble.

On the work front, Urvashi Rautela was last seen judging the Miss Universe Pageant 2021, actress also bagged appreciation for her international song Versace Baby alongside Arab superstar Mohamed Ramadan. Urvashi Rautela will be soon seen in the Jio studios web series ‘Inspector Avinash’ opposite Randeep Hooda in a lead role. The actress is going to play the lead role in a bilingual thriller “Black Rose” along with the Hindi remake of “Thiruttu Payale 2”. Urvashi Rautela will be making a Tamil debut with the 200 crores big-budget film “The Legend” opposite Saravana. The actress has also signed a three-film contract with Jio Studios and T-Series.

Jaitv Feed - September 27, 2021
In today’s day-to-day life uncertainty is the only certainty in our daily lives and work. Physical and Mental health plays a very pivotal role...

Social Desk - June 17, 2020
Sherlyn Chopra is a popular Indian Actress, Singer, and Model Known for her works in Bollywood and Playboy Magazine. She won the title of...

How to influence people and make friends

Jaitv Feed - September 5, 2022
Anil Singh, who is all ready to make his name with his power-packed acting and directing skills, has recently announced his first poster for...
Facebook Instagram Koo Telegram Twitter
© JaiTV
MORE STORIES