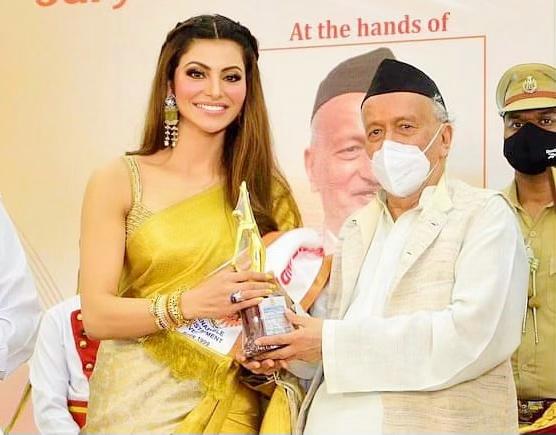 Bollywood’s beauty Urvashi Rautela recently was awarded the ‘Stree Shakti National Award’ for her achievement in the field of ‘Hindi Silver Screen’ by the hands of Hon’ble Governor Of Maharashtra and Goa Bhagat Singh Koshyari at the Rajbhavan followed by a small celebration for the ones presented with the award.

Urvashi Rautela is filled with gratitude and feels more motivated than ever, she says, “Since I’m the youngest person to ever achieve this honour from the film fraternity / our industry to receive the Stree Shakti National award, I feel blessed.” Furthermore, she elaborates and says, “I believe Shakti is the divine feminine force of creativity and the Mother Goddess. Shakti is most active through womanhood, and also the one that creates all change. It is worshipped as one of the Supreme Being.”

As a believer in women empowerment, Urvashi Rautela says, “The recognition that this award provides also helps to inspire others to strive for greatness in whatever field they choose. An award such as the Stree Shakti National Award represents the next step in the empowerment of women. In order to empower women, and make them self-reliant, the concept is essential”. The actress has been inspired by this award to do even better in her career and personal life.

Jaitv Feed - October 16, 2021
Bollywood actress Urvashi Rautela is all set to release her Hindi film in 2021. The Hindi remake of "Thiruttu Payale 2". The actress has...

Social Desk - June 17, 2020
Sherlyn Chopra is a popular Indian Actress, Singer, and Model Known for her works in Bollywood and Playboy Magazine. She won the title of...

Jaitv Feed - November 21, 2021
Seerat Kapoor, who is soon to make her Bollywood debut alongside Naseeruddin Shah, is now working on two projects at the same time. With...

Jaitv Feed - February 12, 2021
The multi-skilled actress Seerat Kapoor, has supremacy over the Tollywood industry. However, the actress is exploring her boundaries and will soon be seen in...
Facebook Instagram Koo Telegram Twitter
© JaiTV
MORE STORIES