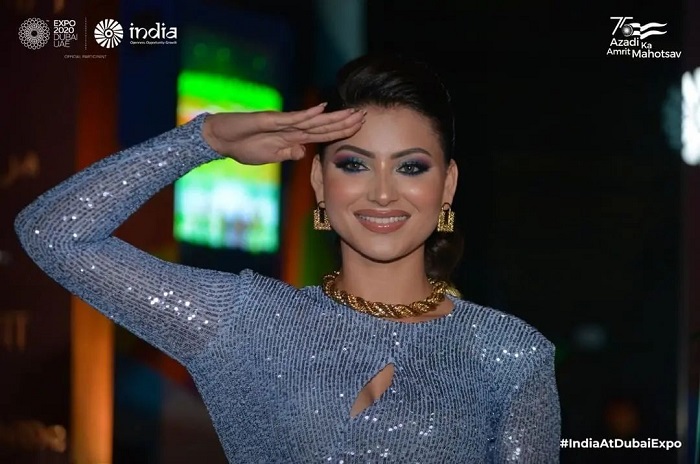 Urvashi Rautela, the youngest superstar has paved her way internationally along with Bollywood by climbing the ladder of success every day through her hard work and dedication. Urvashi Rautela recently reached the mark of 46 million on her Instagram.

Urvashi Rautela visited the ongoing Expo 2020 Dubai. The official Twitter account of Expo 2020 shared pictures of the actress with the tweet as   Indian Actor, visited the #IndiaPavilion at @expo2020dubai today. It seems that Urvashi enjoyed a tour around Expo 2020 Dubai’s site. The actress is seen sporting a stunning glittery light blue gown with a one-sided cut. Urvashi opted for a pastel shimmer body fitting ensemble which had a high slit cut to it which made her look very astonishing she paired up her look with a ponytail along with shimmer blue eyeshadow and nude lips to add a glam she accessorized herself with a golden chain pattern neck piece along with square-shaped earring which made the actress looks stunning as always.

Urvashi is seen posing around with a huge smile and pride of making India proud at each and every stage of her life. We can definitely say that Urvashi is one of the few Bollywood actresses who has made a name for herself not only in India but also throughout the world.

See her photos from her visit to the United Arab Emirates –

On the work front, Urvashi was last seen judging the Miss Universe Pageant 2021, and also bagged appreciation for her international song ‘Versace Baby’ alongside Arab superstar Mohamed Ramadan. Urvashi will be soon seen in the Jio studios web series ‘Inspector Avinash’ opposite Randeep Hooda in a lead role. The actress is going to play the lead role in a bilingual thriller ‘Black Rose’ along with the Hindi remake of ‘Thiruttu Payale 2’. Urvashi will be making a Tamil debut with ‘The Legend’ opposite Saravana and has also signed a three-film contract with Jio Studios and T-Series.

Jaitv Feed - July 2, 2021
Giorgia Andriani has made it a point to shine on social media with her enthralling reel videos and hot photos. The actress is known...

Jaitv Feed - June 16, 2021
Bollywood’s youngest Superstar Urvashi Rautela has revealed one of the secrets to her beauty. The actress recently posted a photo on her social media...

Social Desk - May 14, 2020
Taapsee Pannu is an Indian film actress and model known for her work in Telugu, Tamil, Malayalam and Hindi films. She made her acting...