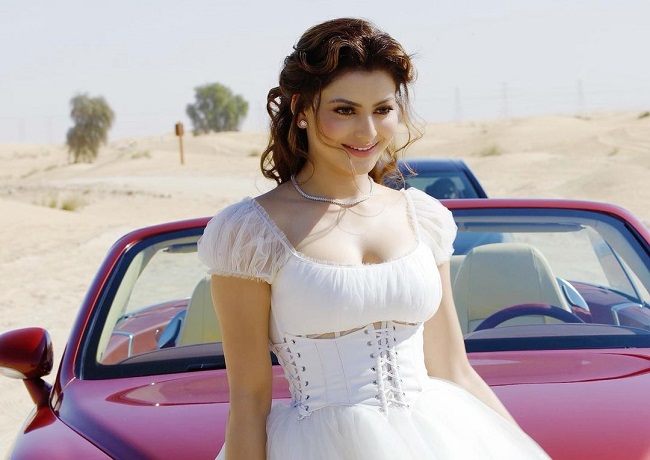 The fashion icon and actress, Urvashi Rautela, has once again surprised us by her extravagant fashion sense. “Sanam Re” star, the gorgeous Urvashi Rautela is a wonderful actress, which is evident through her films like “Virgin Bhanupriya”, “Porobashinee”, “Mr. Airavata”, and many more to come. The film industry is not the only one that Urvashi Rautela is superior in, she has done some wonderful performances in several music videos like “Love Dose”, “Teri Load Ve”, “Ek Diamond Da haar” and a lot of other hits.

Urvashi Rautela said, “So grateful & honoured to play the “Marilyn Monroe of Bollywood” ‘Venus of Bollywood’ Madhubala Ji for my new #EkLadkiBheegiBhaagiSi  The legendary beauty icon, who graced the Indian cinema with her art and beauty. Known for her beauty, personality, and sensitive portrayals of women in films. I’d like to thank the entire team of ELBBS for having me & being the first choice since day 1.I’m elated to get a lot of compliments for my voice & vocals in the song”

Social Desk - April 12, 2020
Suhasini Haidar is an Indian print and television Journalist. She is the Diplomatic Affairs Editor of The Hindu, a leftist newspaper. She regularly writes...

Social Desk - February 6, 2016
Yogi Adityanath is a politician, member of Bharatiya Janata Party and Mahant of the Gorakhnath Math, a Hindu temple in Gorakhpur. He is the...
Facebook Instagram Koo Telegram Twitter
© JaiTV
MORE STORIES