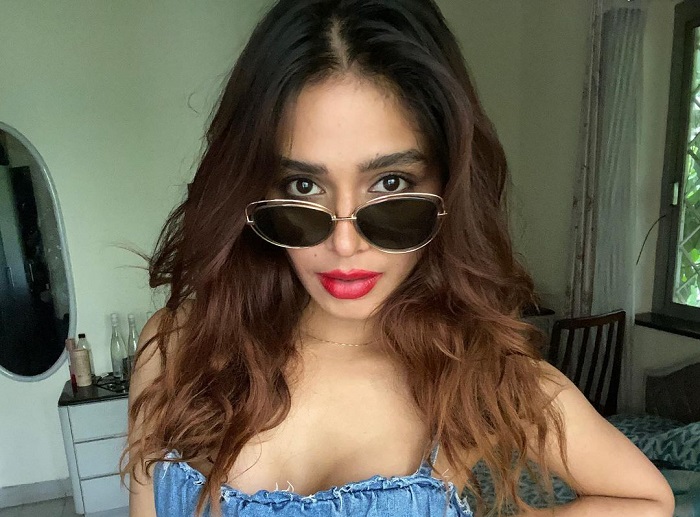 While the majority of the B-town knows how to do their own makeup when needed, Pranati Rai Prakash shares a video on her Instagram sharing her beautiful yet easy makeup look. The actress first applies a shade of pink blush and contours her cheekbones with a light amount of powder contour, she decided to go with bold red lips, and clearly, she looks stunning. In the end, Pranati Rai Prakash curls her hair and brushes out to make it wavy and voluminous, and to complete the look she changes her outfit to a denim dress looking absolutely stunning in her whole look.

Pranati Rai Prakash has grabbed a lot of attention from people on social media for not only her amazing pictures and dance videos but also for sharing her thoughts on positivity, gratitude, and mental health.

On the work front, Pranati Rai Prakash has given us some worth watching movies and web series like “Family Of Thakurganj”, “Love Aaj Kal”, “Mannphodganj Ki Binny”, and many more. Pranati Rai Prakash will be seen next in the ALTBalaji web series ‘Cartel’ and ‘Blackwood’. The actress has also been cast in the Netflix web film “Penthouse” directed by Abbas-Mastan in which she will be seen opposite Arjun Rampal.

Social Desk - October 2, 2019
Sakshi Joshi is a Journalist. She is currently working as a news anchor at News 24. Moreover, she has created her name in the...

Jaitv Feed - October 15, 2021
Wishing someone for their upcoming endeavours always turns out to be a boost of motivation. Giorgia Andriani who has set the mark in the minds of...

Social Desk - July 19, 2020
Neha Batham is an Indian news reporter and anchor. She works at Aaj Tak as a Senior Correspondent. She is known for her unmatched...
Facebook Instagram Koo Telegram Twitter
© JaiTV
MORE STORIES