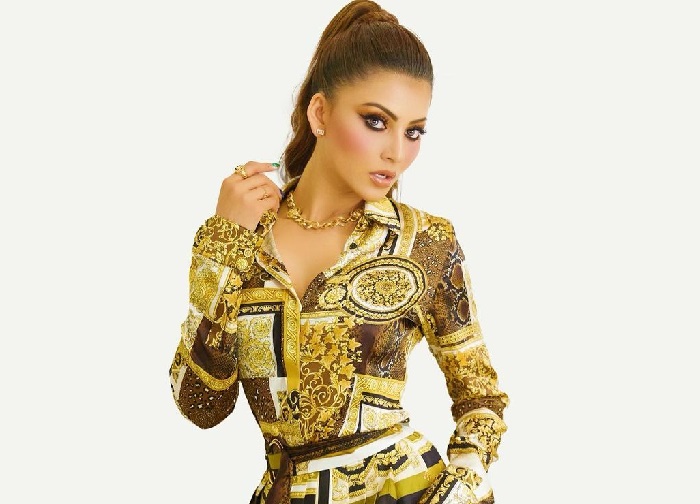 Bollywood’s youngest superstar Urvashi Rautela is a real fashionista and has aces all her styles and loves experimenting with the trends which leaves her fans wanting for more, she is known for carrying luxury outfits with the utmost grace. The actress was seen in movies like “Virgin Bhanupriya”, “Pagalpanti”, “Singh Saab the Great”, “Mr. Airavata”, “Sanam Re” and many more where her acting was critically acclaimed. Urvashi Rautela recently debuted Internationally with the hit album “Versace Baby” with Mohamed Ramadan and is loved by millions of fans all over the globe.

When it comes to luxury outfits no one can pull it better than Urvashi Rautela. The actress is covered in all Versace in the song, from the outfits to shoes, to accessories, everything revolves around the brand “Versace”. The actress is wearing the iconic Versace baroque print dress, the fashion was started by Gianni Versace in the late 1980s he replaced the angels and cherubs of Italian frescos with gold chains, Medusa heads and leopard skins printed on shiny silk. The dress which the actress is wearing is again one of the most iconic prints and costs around 15 lakhs, Urvashi Rautela has styled the dress with a belt on the waist along with golden jewelry and paired with black Balenciaga shoes.

On the work front, Urvashi Rautela will be making her Tamil debut with a big-budget sci-fi Tamil film in which she will be playing the role of a microbiologist and an IITian, and later she is going to appear in a bilingual thriller “Black Rose” along with the Hindi remake of “Thirutu Payale 2”. Urvashi is starring in the web series “Inspector Avinash” alongside Randeep Hooda, which is a biopic based on the true story of super cop Avinash Mishra.

Social Desk - April 18, 2020
Neha Pant is an Indian Journalist and News Anchor. She is stated as to be the calmest and most relaxed anchor. She is basically...

Social Desk - April 17, 2020
Rubika Liyaquat is an Indian Journalist and News Anchor. She is popular among the Indian audience for her oratory skills, pretty looks and anchoring...