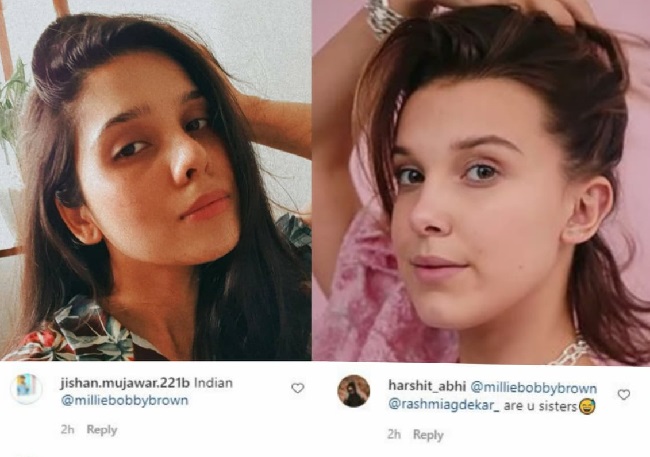 Andhadhun fame actress Rashmi Agdekar after playing many characters in her series and film is now considered like Millie Bobby Brown lookalike after her recent upload.

The actress has time and again won the heart of her audience by performance on screen. Rashmi Agdekar started her acting career in 2017, in the web series “Dev DD” and played the lead role in the MX player web series “I’mMature” in which her acting was critically acclaimed. She also made her debut in Bollywood with the film “Andhadhun” alongside Ayushmann Khurrana.

Rashmi Agdekar recently posted a few adorable selfies on her Instagram. The actress has mentioned that it’s her favorite filter which she has used. Rashmi Agdekar is seen wearing a big print floral T-shirt and has left her hair loose while she is posing for the camera.

The actress has captioned the photos as “Extra Who! ”, and her fans are going crazy over how similar she looks to the “Stranger Things”, fame actress Millie Bobby Brown, her fans have flooded the comment section by calling her the Millie Bobby Brown of India and some fans have even asked her questions like “@milliebobbybrown @rashmiagdekar_ are u sisters?” to which Rashmi Agdekar jokingly replied, “@harshit_abhi maybe! Maybe not ”.

Actress Giorgia Andriani looks a complete Diva as she was spotted at the airport...

Jaitv Feed - October 2, 2021
Giorgia Andriani who has always been known for her outstanding persona has always put all her fans to awe because of her killer looks...

Jaitv Feed - November 6, 2021
Pawan Singh, who is a well-known superstar, has worked in Bhojpuri language pop albums and films. Pawan who also made acting debut in Bhojpuri...