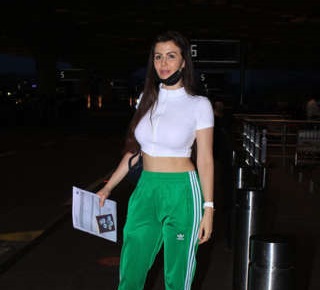 Recently this hot bombshell beauty was spotted at the Mumbai airport as she was seen heading to Dubai for shooting for an exciting project.

Actress Giorgia Andriani opted for a subtle look she was indeed looking very elegant she choose to wear a green color Addidas Track Pant. Paired with a white crop top, which she paired ut white sneakers, Giorgia kept her look very subtle as she kept her hair open with minimal makeup. Though the look was very subtle the actress indeed grazed our heart with her appearance. Giorgia has always been the talk of the town for her magnificent looks.

On the work front, Giorgia Andriani made her debut in the south with the series “Karoline Kamakshi”. The actress Giorgia Andriani was seen with Mika Singh in his music album recreating the evergreen song “Roop Tera Mastana” which got a huge response from the audience, She was also seen in a music video along with Shehbaaz Badesha in ‘Little Star’. She will now soon be seen starring in the film “Welcome To Bajrangpur” alongside Shreyas Talpade. Giorgia Andriani has more exciting upcoming projects that she will be announced soon.