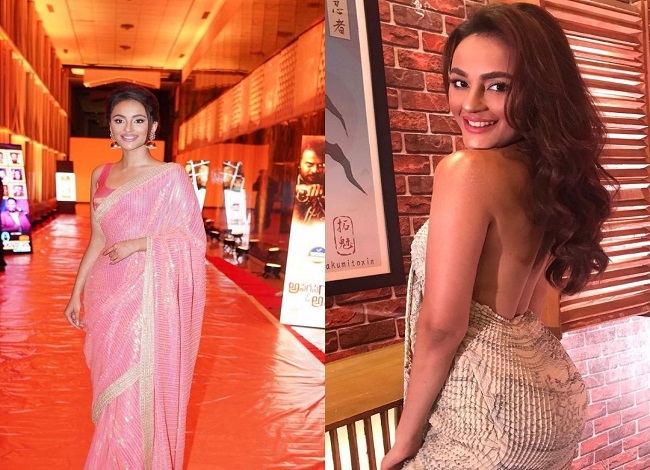 The multitalented actress, Seerat Kapoor has a way of flaunting different types of dresses in the most elegant way, the actress can style a saree as well as dress and take our breaths away. The Tollywood superstar, Seerat Kapoor, is very much known for her hit films like “Maa Vintha Gadha Vinuma”, “Krishna and His Leela”, “Touch Chesi Chudu”, “Tiger”, and “Okka Kshanam”. The actress is a professional dancer and besides acting and dancing, Seerat Kapoor is also a trained classical singer.

Seerat Kapoor recently took to Instagram to flaunt her two different looks which are hot in their own ways. We can see her in a sexy pink saree with embroidered borders and pink sleeveless blouse, the actress completed the look with big jhumkas and on the other hand, Seerat Kapoor can be seen wearing a glamorous split thigh backless dress looking pretty hot and revealing most of her clear skin, the look is completed with heels matching the color of the dress. Seerat Kapoor is looking sensual in both the looks that are loved by the fans.

On the work front, Seerat Kapoor is all set to make her Bollywood debut with the legendary actor Naseeruddin Shah and Tushar Kapoor in the film “Maarrich”. The film is being produced by the Tushar Kapoor productions.

Social Desk - June 20, 2020
Kangana Ranaut is a well known Indian actress and filmmaker who works in Hindi Films. She is one of the top paid actresses across...