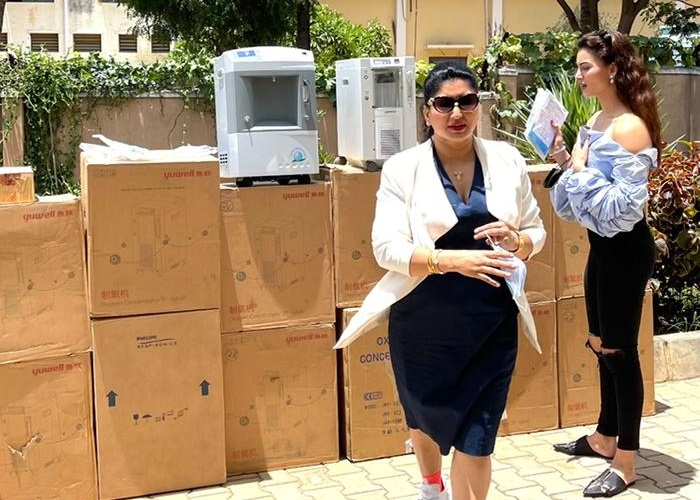 Everyone’s aware about Urvashi Rautela’s Rise to Global Fame & international success, Some souls are meant to wander the world. Some are meant to conquer it. Today she has become a force to reckon with internationally and is much sought after by Hollywood’s A+ lister. Bollywood’s youngest superstar Urvashi Rautela yet again extended a helping hand and donated oxygen concentrators. The actress recently made her debut internationally with the album “Versace Baby” opposite the Egyptian actor Mohamed Ramadan, after garnering a blockbuster response from the audience Urvashi Rautela contributed her earnings from her song “Versace Baby” to the Covid-19 Relief Fund in India and Palestine Society.

Urvashi Rautela hails from Haridwar, Uttrakhand itself and she never fails to disappoint her very own people. During these difficult times of the pandemic when Uttrakhand needed a helping hand, the actress recently flew to the state of Uttrakhand and donated 27 oxygen concentrators which cost 5 lacs each overall worth 1 crore rupees under the “Urvashi Rautela Foundation”. Urvashi Rautela recently donated 20 oxygen concentrators in which overall cost 2 crores 35 lakh for 47 Concentrators. The actress was also seen distributing food packages along with masks and water bottles for the poor after Cyclone Tauktae hit Mumbai. Urvashi Rautela started a youtube channel to earn revenue which she would donate just to help with the Covid-19 relief funds in India. The actress is truly an angel for the needy.

On the work front, Urvashi Rautela will be making her Tamil debut with a big-budget sci-fi Tamil film in which she will be playing the role of a microbiologist and an IITian, and later she is going to appear in a bilingual thriller “Black Rose” along with the Hindi remake of “Thirutu Payale 2”. The actress recently got a blockbuster response for her song “Doob Gaye” opposite Guru Randhawa.  Urvashi is starring in a lead role in Jio studio’s web series “Inspector Avinash” opposite Randeep Hooda, which is a biopic based on the true story of super cop Avinash Mishra.

Social Desk - April 6, 2020
Kapil Mishra is an Indian Politician and a former MLA from Karawal Nagar, Delhi. He is very Popular on Social Media. He was Minister...

Social Desk - June 20, 2020
Kangana Ranaut is a well known Indian actress and filmmaker who works in Hindi Films. She is one of the top paid actresses across...