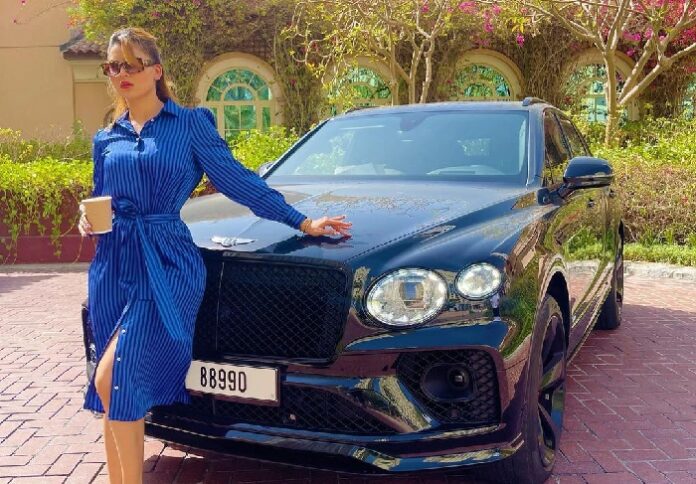 Urvashi Rautela who is Bollywood and one of the youngest superstar has always amazed the audience with her stellar performance and looks and has made India proud in every way possible. She is one of those beauties who always grabs the limelight with her scintillating looks. Be it an Airport look, Red carpet look or ramp walks. This diva has always made heads turn. The actress yet again stole the entire limelight and grabbed the eyeballs as she was seen having her brew break in a Bentley.

Urvashi took to her social media and shared a picture of herself where she is seen enjoying her cup of coffee as she posed with a limited-edition Bentayga Bentley. Urvashi looked stunning as she opted for a blue shirt striped dress along with the belt attached to it. She tied her tresses in a half pony with a clutch and wore glasses to protect her eyes from the UV rays. Along with minimal makeup and a tint of blush, she completed her look. Urvashi rounded off her entire look with black juttis which had a diamond-studded design over them. Urvashi posed along with the cup of her coffee and slayed her look and poses as always and made everyone go gaga behind her.

Check out the stunning pictures now.

On the work front, Urvashi has been appointed officially to Judge Miss Universe Bahrain 2022, Along with that, she is a Smile Train Global brand ambassador. Apart from that, the actress received acclamation for her performance in her pan-Indian film, The Legend, and she will also be seen now in Inspector Avinash opposite Randeep Hooda, for Jio Studios and Netflix.

Social Desk - April 20, 2013
Rajat Sharma is an Indian Journalist, News Anchor and Editor. He is the Chairman and Editor-in-Chief of India TV. He hosts the very famous...

Jaitv Feed - June 9, 2021
Everyone’s aware about Urvashi Rautela’s Rise to Global Fame & international success, Some souls are meant to wander the world. Some are meant to conquer...

Jaitv Feed - September 1, 2022
Urvashi Rautela who is Bollywood and one of the youngest superstar has always amazed the audience with her stellar performance and looks and have...