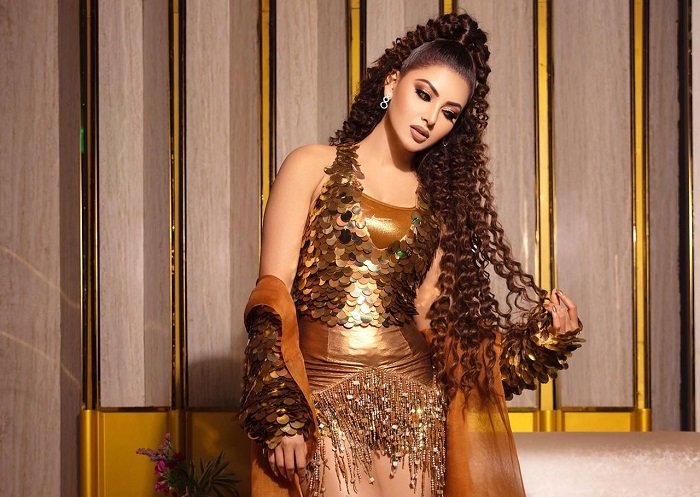 Urvashi Rautela is one of Bollywood’s youngest superstars and has always made India proud at every stage of her life. The actress never fails to captivate audiences with her amazing features. She has been steadily ascending the success ladder since she arrived in Bollywood. She has made us all proud once again by adding another remarkable achievement to her crown. The actress is now all set to make her Hollywood debut with Michele Morrone.

Recently, the actress visited Delhi to perform at the Delhi. Along with Urvashi, Ranveer Singh had also shared the stage and the outstanding performance of the duo made fans go crazy behind their full power pack performance. Fans call the duo as Energy ka Bhandar.

Urvashi looked stunning as she opted for a designer look.She wore an outfit by ace designer Prreeti Jaiin Nainutia Nirmooha’s outfit. She looked stunning as she wore a golden shimmer sleeveless dress which had a golden shimmer sleeve detached from the dress with a golden shimmer embellished mini skirt the actress rounded off her look with a long veil golden jacket paired with golden shoes. The actress’s makeup looked very stunning. The thing that stole our hearts was the hair. The actress went all curly with her hair tied up in a ponytail. The entire look of the outfit cost Rs 5 Lakh.

Urvashi had shared a glimpse of her looks and the performance on her social media. The way the actress performed made us just go insane behind her scintillating beauty. Fans couldn’t stop themselves from showering love on her.

On the work front, Urvashi was last seen judging the Miss Universe Pageant 2021, and also bagged appreciation for her international song ‘Versace Baby’ alongside Arab superstar Mohamed Ramadan. Urvashi is making her big Hollywood debut along with 365 Days star Michele Morrone. Which will be produced by Netflix, Tomasz Mandes, and will be directed by 365 Days director Barbara Bialowas. Urvashi will be soon seen in the Jio studios’ ‘Inspector Avinash” opposite Randeep Hooda in the lead role.

The actress is going to play the lead role in a William Shakespeare bilingual thriller ‘Black Rose’ based on the Merchant of Venice, along with the Hindi remake of the superhit ‘Thiruttu Payale 2’. Urvashi will be making her Tamil debut with a multilingual film ‘The Legend’ opposite Saravana and has also signed a three-film contract with Jio Studios and T-Series. Urvashi will also be seen opposite international superstar Jason Derulo in her next international music single.

“While watching my performance on the big screen, my parents were teary-eyed,” says Rakshabandhan actor Sahil Mehta

Urvashi Rautela Net Worth is $30 Million, more than Rishabh Pant’s Net Worth till August 2022

Jaitv Feed - July 30, 2022
Since music surely calms our brains, it always plays a crucial role in our lives. When music contains one of our favourite people, we...

Jaitv Feed - March 21, 2022
Suryaveer, a well-known singer and performer, is an inspirational powerhouse. He shares his feelings of excitement and love for music through his songs. With...
Facebook Instagram Telegram Twitter
© JaiTV
MORE STORIES