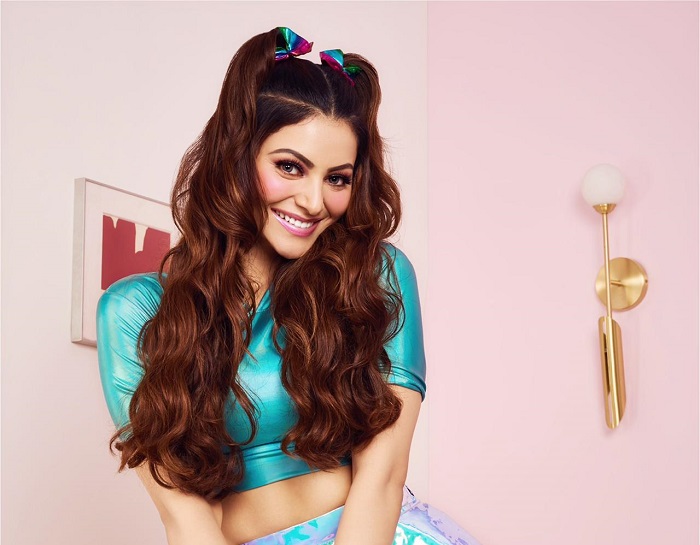 Bollywood’s youngest superstar Urvashi Rautela has made numerous headlines recently with her royal and elegant outfits. In contrast to her drab collection of traditional attire, Urvashi Rautela is now wearing a bright and cute look. The actress is known for her fashion statements and loves accessorizing her outfits. It is her outfits and jewellery collections that have made her a big hit in the industry and the audience keeps wanting more.

Urvashi Rautela recently shared an image of herself wearing a flamboyant outfit. The actress looks adorable and stunning in a blue metallic crop top and mini flare skirt with her hair tied in two half-part ponytails with cute blue-pink bows and her pinkish glam makeup completing her outfit. With a fun caption on the photo, she asks, “Why one color when you can Glow with all of them?”.

It seems like Urvashi Rautela’s fans are going crazy over her new look. There are tons of comments expressing their love for her. One of the comments by a fan is going viral on the internet, the fan commented saying, “India’s Harley Quinn  Margot Robbie !!  Best fit for Suicide Squad & Batman @dccomics are you listening?”. He didn’t hesitate to ask DC comics to cast Urvashi Rautela, as he thought she would be a perfect fit.

Urvashi Rautela can easily pull off the role of Margot Robbie’s character in the movie ‘Suicide Squad’, one of the most beloved characters among DC fans. Urvashians are hoping and wishing that she will appear in Hollywood in the near future.

Jaitv Feed - March 14, 2022
Buying animals of a specific breed has become normal in our society. But lately, there has been a rise in the rescue and adoption...

Social Desk - January 5, 2020
Payal Rohatgi  is an Indian film Actress, Model, and Television Performer, who appears in Bollywood films. She was a participant in the Miss India...

Jaitv Feed - June 17, 2020
When the epidemic named Corona entered the world, the whole world was shocked. Due to which lockdown was announced in many countries. But as...
Facebook Instagram Koo Telegram Twitter
© JaiTV
MORE STORIES