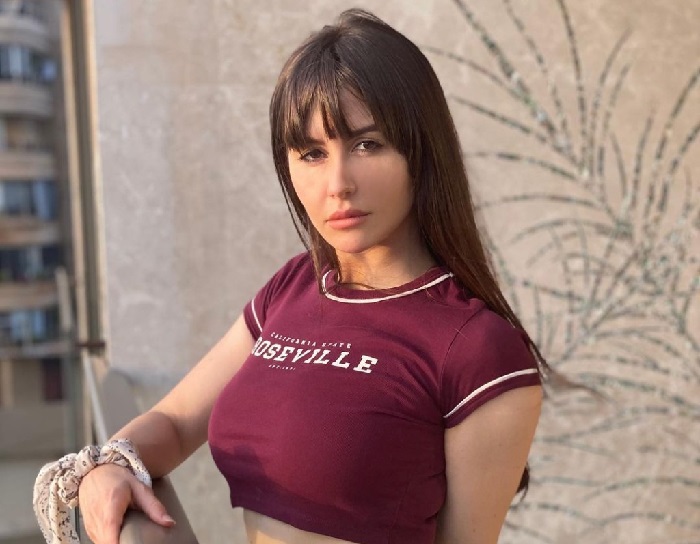 The stunning Giorgia Andriani is a skilled dancer and, has always impressed the audience with her graceful moves. The actress shared a throwback video on her social media while practising kathak. Giorgia Andriani has learnt quite a few things after entering Bollywood, she not only speaks Hindi fluently but also has a good grip of her accent in Punjabi. The actress was recently seen in the music video “Little Star” alongside Shehbaz Badesha which garnered a good response from the audience.

Giorgia Andriani shared a throwback video from 2019 on her Instagram story where the actress is seen focussed and practising her Kathak leg movements wearing ghungroo and following the dance ethics in a beige Kurti. The actress has been training in the classical dance form ‘Kathak’ for a few years now and, she seems to be grasping and performing really well.

Giorgia Andriani also performed kathak on the song Deepika Padukone’s song “Mohe Rang Do Laal” where she concentrates on facial expressions and hand movements while in the sitting position. Giorgia Andriani has previously expressed her love for Indian culture and her love for Bollywood which has always inspired her to do better and catch onto learning new aspects. Giorgia Andriani also does hip hop and freestyle effortlessly. The actress is active on social media and constantly keeps posting her dance videos on trendy hits impressing her fans every single time.

On the work front, Giorgia Andriani made her debut in the south with the series “Karoline Kamakshi”. The actress Giorgia Andriani was seen with Mika Singh in his music album recreating the evergreen song “Roop Tera Mastana” which got a huge response from the audience, she will be soon starring in the film “Welcome To Bajrangpur” alongside Shreyas Talpade. Giorgia Andriani has more exciting upcoming projects that she will be announcing soon.

Urvashi Rautela to be working opposite Hrithik Roshan in Krrish 4?

Jaitv Feed - December 25, 2020
The stunning and gorgeous Urvashi Rautela has been talk of the town for her back to back projects, even in the lockdown, the actress...

Social Desk - January 30, 2013
Amit Shah is a prominent Indian politician. He is the current Home Minister of India, and a Lok Sabha Member. He is a close...