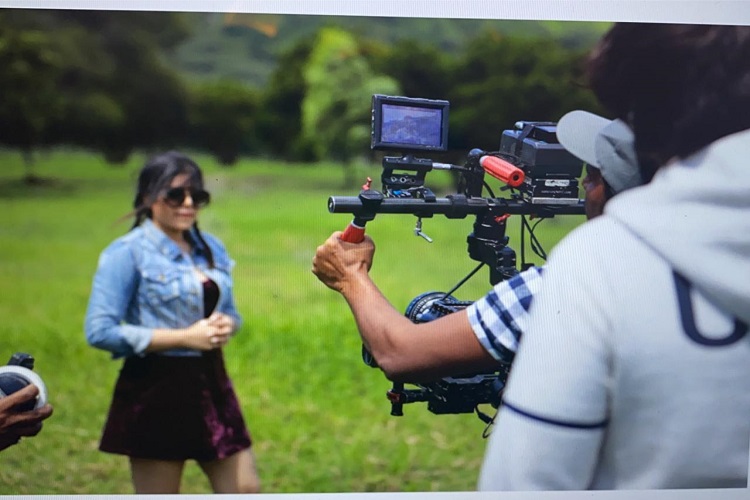 Sehnoor’s Much Awaited song ‘Girlfriend’ is finally out on ‘Zee Music Company’ Youtube channel and in a week it is receiving a great response from all her fans around the globe. The actress has shared behind the scenes of the song with us.

The song is filmed beautifully in Mauritius. While sharing some BTS photos, the actress shared her experience with us. In the picture, Sehnoorr is looking very beautiful standing in front of the camera in-between nature. The entire team had a lot of fun while filming the song. The song ‘Girlfriend’ has been produced by Sehnoor and this is the first time that she is acting in this song.

Talking about her song Sehnoor said, “The song has been shot in Mauritius and it was really a great experience shooting there, during our song shoot right after the day we use to do lot of fun activities, do water sports, and the city was really fun and beautiful. I am again going to visit Mauritius as we have lined up a few more projects there. Girlfriend song has been produced by me and I’m going to feature for the first time in my song, so really excited about that.”

Girlfriend song has been Directed by Aman Prajapat, Produced by Sehnoor, Sung By  Piyush Ambhore, Music and lyrics by Elfyv Music and Piyush, the song is finally out on Zee Music. On the work front, Sehnoor is in talks for more Music video in which she will be featured. So the Producer and director Sehnoor is Coming with some more exciting projects in the future.

E Desk - October 9, 2021
An educational app Byju's that has Shah Rukh Khan as its brand ambassador, has temporarily halted advertisements featuring the Bollywood superstar as his son...