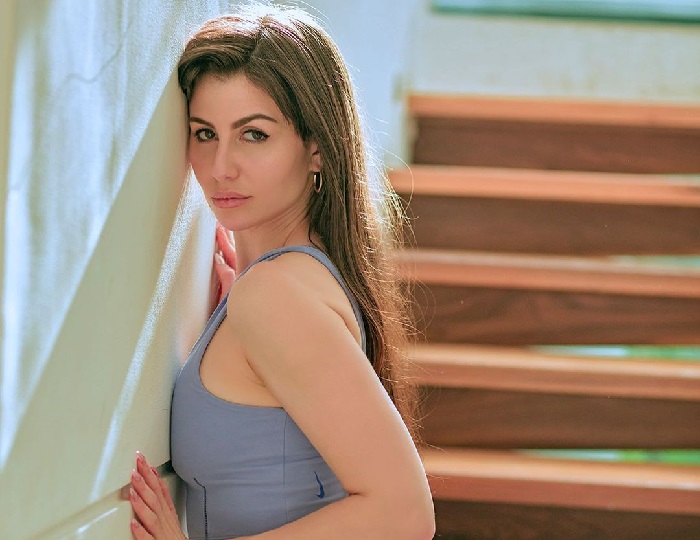 Actress Giorgia Andriani’s social media is more than entertaining, the actress uploads Instagram reels with the most trending sounds in her own creative way. Her fun videos never fail to impress her audience. The actress is known for her sexy dance movies and heart-stealing pictures, she was recently seen in the music video ‘Little Star’ alongside Shehnaz Gill’s brother Shehbaz Badesha which garnered a huge response from the audience.

Giorgia Andriani yet again uploaded a cute and hilarious reel on her Instagram with her pet dog named Hugo. Keeping up with trends, the actress is back on the reel game doing the ‘Silhouette Challenge’. This viral challenge was originally created to encourage women to be confident in their bodies.

Giorgia Andriani prefers to open up her creative side, so she made the video in her own way with her dog Hugo. A silhouette of the actress is seen in the first scene, which transitions to Hugo sitting on her head, she hilariously states in the caption, “Put your paw on my shoulder @hugo.khandriani”.

The B-Town diva is many times spotted by the paparazzi with her pet Hugo and they are the cutest duo around town, the actress has also made a lot of videos and posted a ton of pictures expressing her love for her pet.

On the work front, Giorgia Andriani made her debut in the south with the series “Karoline and Kamakshi”. The actress Giorgia Andriani was seen with Mika Singh in his music album recreating the evergreen song “Roop Tera Mastana” which got a huge response from the audience, she will be soon starring in the film “Welcome To Bajrangpur” alongside Shreyas Talpade. Giorgia Andriani has more exciting upcoming projects that she will be announcing soon.

“Can’t wait for everyone to see what we have in store for them”,says actress Kavya Thapar on her new song Tenu Dil Vich Rakhan