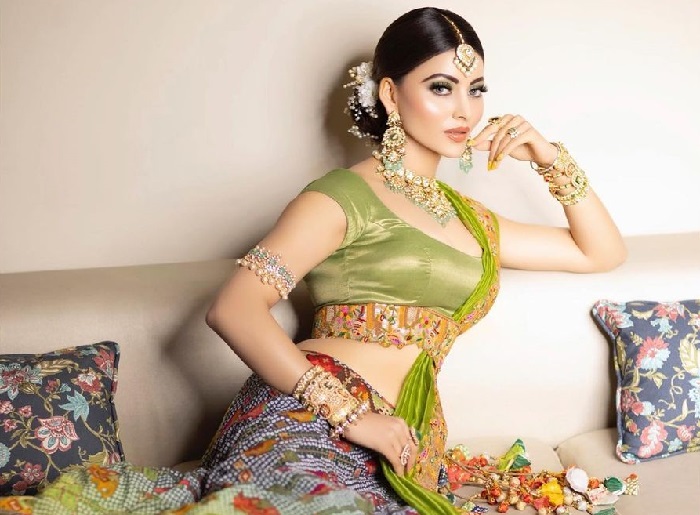 Bollywood’s superstar Urvashi Rautela is one of the celebrities who can carry every kind of fashionable outfit. From draping a saree to donning a gown the actress captures hearts with her beauty and elegance. Urvashi Rautela is known to have a few of the most luxurious jewellery and outfit collection in the industry and everybody knows she that the actress never goes without bling.

Urvashi Rautela is yet again seen looking gorgeous in traditional attire which she wore at Manoj Kumar’s Granddaughter Muskan’s wedding. The actress is wearing a Rajasthani Bandhani Lengha by Asha Gautam which has an extravagant price of Rs 4,00,000. The Rajasthani Bandhani is a handmade tie-dye design that is known to have intricately decorated by plucking the cloth with the fingernails that form a figurative design.

Urvashi Rautela’s lehenga has three shades which are navy blue, green, and, brown with a kamar latkan. The choli and dupatta are spring green with lovely borders. Urvashi Rautela can never go without bling, the actress has paired her attire with royal studded jewellery from Shobha Shringar Jewellers and the set also includes a mang tikka and baju bandh, the bangles are from Tyaani’s Polki Jewellery and the total worth of it goes up to Rs. 58,00,000.

Urvashi Rautela has done a glam green smokey eye makeup look with peach soft lips, her hair is put into a clean bun with a gajra to complete the whole look. The fact that Urvashi Rautela looks absolutely beautiful cannot be denied. Lately, the actress is seen wearing quite elegant traditional pieces like her Gujarati patola saree, golden saree at the Stree Shakti Awards, and now this stunning lehenga and she has pulled it off in the most stunning way possible.

News Features - March 29, 2022
Come April and a new talent is set to shine in the entertainment industry -- actress Pranali Sanghmitra Bhagwat. The spunky gal makes her...

Social Desk - October 9, 2014
Sweta Singh is a professional news anchor. She is a well known name in the Indian news industry. She is a news anchor and...

Social Desk - January 5, 2020
Payal Rohatgi  is an Indian film Actress, Model, and Television Performer, who appears in Bollywood films. She was a participant in the Miss India...

Pranati Rai Prakash grooves in a black dress on the dance floor, Check Out...

Jaitv Feed - November 21, 2021
Fitness is extremely important for any actor, and preserving that hourglass body is essential. To stay in the game, Bollywood actresses must adhere to a...
Facebook Instagram Koo Telegram Twitter
© JaiTV
MORE STORIES