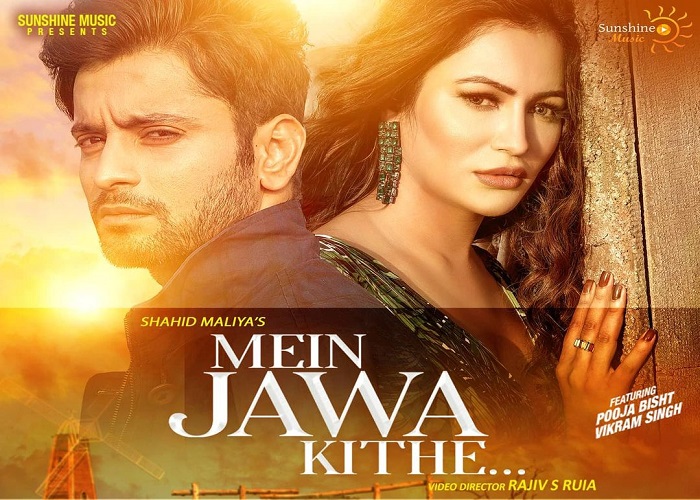 The first look poster and the teaser of the song “Mai Jawa Kithe” is out now featuring Pooja Bisht and Vikram Singh. The Heartthrob singer Shahid Mallya has given his amazing voice for the song which is composed by Sangeet Saral and directed by Rajiv S Ruia. The song will be released soon under the label of Sunshine Music.

The teaser of the song “Mai Jawa Kithe” looks extremely romantic and intense at the same time. The chemistry between Pooja Bisht and Vikram Singh is already shining and both of them are looking their best. As the poster shows Pooja Bisht sitting on a horse while Vikram Singh is helping her out gives it a very dreamy touch. The song title and the music seem to give us a hint that this will be a romantic song.

Recently, director Rajiv S Ruia released his song “Mental” featuring Dev Sharma and Preeti Goswami, which got a huge response from the audience, and now he is again ready with another single “Mein Jawa Kithe”. After giving back-to-back two-hit music “Khawabon Khayalon Mein” and “Mental”, Sunshine Music took Rajiv S Ruia onboard for more than 10 songs which seems that the director has lots more on his bucket list and will make a century soon.

Actress Pooja Bisht was last seen in the movie Mushkil and recently she gave an amazing performance in the series ‘Flawed’. The highlighted part of the song ‘Mai Jawa Kithe’ is the amazing singer Shahid Mallya, he has given many hits to Bollywood like, ‘Kukkad’, ‘Do Dhaari Talwaar’, ‘Iski Uski’, ‘Ikk Kudi’, ‘Daryaa’ and many more. The song teaser and the poster is already out and the song will be releasing soon.

Social Desk - April 12, 2020
Suhasini Haidar is an Indian print and television Journalist. She is the Diplomatic Affairs Editor of The Hindu, a leftist newspaper. She regularly writes...

Social Desk - November 11, 2020
Sara Ali Khan is an Indian actress who works in Hindi Films. She is an emerging actress of Bollywood. She appeared in Forbes India's...