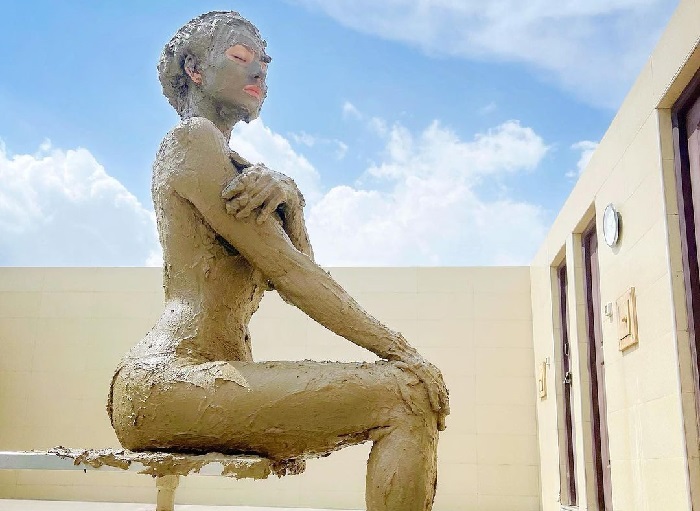 Bollywood’s youngest Superstar Urvashi Rautela has revealed one of the secrets to her beauty. The actress recently posted a photo on her social media revealing her tip which helps her to relax and gives her beautiful skin. Urvashi Rautela is currently training for her women-centric action film and is working out rigorously as she has decided to perform the stunts on her own.

When it comes to beauty, celebrities take it to the next level for beautiful skin in the long run. One of the techniques of gaining beautiful skin and is said to be used for a long time is “Mud baths”. Urvashi Rautela shared a photo on her Instagram completely covered in mud from head to toe, she looks absolutely like an elegant and poised statue.

The actress believes that mud bath has helped her have beautiful skin and moreover helps her relax and clear her mind, she states the history of mud baths explaining the benefits of it in her caption, she says, “MY FAV MUD BATH SPA / MUD THERAPY Cleopatra was an early lover of a mud bath, while modern fans include me. Enjoying the red mud of a Balearic beach. It’s said to have been used as a mirror by Venus, the Roman goddess of love. Its mineral-rich mud is considered therapeutic and good for the skin. Mud really can be a muddy marvel. Covered in healing mud therapeutic Mud Baths are still heralded today for their ability to detoxify and draw out impurities, soften skin, improve circulation, and ease aches and pains.”

Top Hollywood celebrities like Keira Knightley and Gwyneth Paltrow also follow this therapy technique. Also, Experts claim mud can cure conditions such as rosacea, eczema and soothe the pain. Now we all certainly know the beauty behind Urvashi Rautela’s super smooth skin and, the efforts the actress puts in maintaining herself from her beauty to fitness standards is impeccable.

On the work front, Urvashi Rautela will be making her Tamil debut with a big-budget sci-fi Tamil film in which she will be playing the role of a microbiologist and an IITian, and later she is going to appear in a bilingual thriller “Black Rose” along with the Hindi remake of “Thirutu Payale 2”. The actress recently got a blockbuster response for her song “Doob Gaye” opposite Guru Randhawa.  Urvashi is starring in a lead role in Jio studio’s web series “Inspector Avinash” opposite Randeep Hooda, which is a biopic based on the true story of super cop Avinash Mishra and Poonam Mishra.

Jaitv Feed - September 28, 2021
Ekam Bawa who has always been known for his magnificent performance in the Punjabi industry, The singer has finally put an over to the wait...

News Features - March 29, 2022
Come April and a new talent is set to shine in the entertainment industry -- actress Pranali Sanghmitra Bhagwat. The spunky gal makes her...