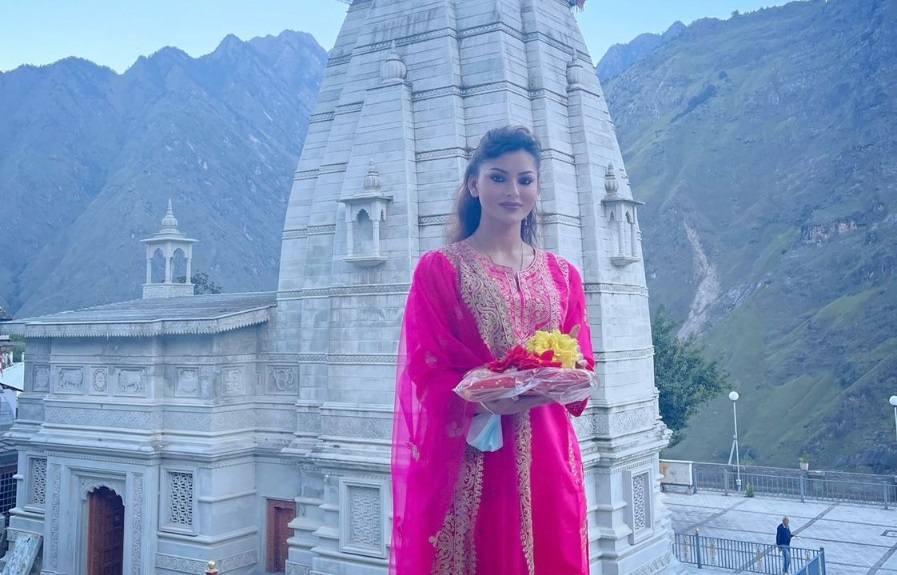 Bollywood queen Urvashi Rautela is a religious person the actress always post a pictures or videos visiting religious places in any corner of India. She is a complete compilation of Hardwork and dedication as she has made sure to keep her the title arise in the minds of the audience.

Although Urvashi Rautela is currently busy with her back-to-back shoots for innumerable projects, she takes time out for her fans and keeps them updating on social media with entertaining content.

This Navratri Urvashi Rautela posted a pictures wishing everyone prosperity, The actress captioned it, “Navratri greetings to everyone. Let us all pray that the divine blessings of Goddess Durga bring you eternal peace and happiness. That they protect you from all wrongdoings and grant all your wishes. Happy Navratri to you and your family.”

The actress further added the hindu shloka in her caption.

On the work front, Urvashi Rautela will be soon seen in the Jio studios web series ‘Inspector Avinash’ opposite Randeep Hooda in a lead role. The actress is going to play the lead role in a bilingual thriller “Black Rose” along with the Hindi remake of “Thiruttu Payale 2”. The actress recently got a blockbuster response for her song “Doob Gaye” opposite Guru Randhawa and “Versace Baby” opposite Mohamed Ramadan. Urvashi Rautela will be making a Tamil debut with the 200 crores big-budget film “The Legend” opposite Saravana. The actress has also signed a three-film contract with Jio Studios and T-Series.

Social Desk - November 14, 2020
Kiara Advani is an Indian actress who appears in Hindi Films and Telugu Filmz. Her Real Name is Alia Advani, but changed her name...

Jaitv Feed - January 19, 2021
When one thinks of sheer beauty, former beauty queen Urvashi Rautela’s name is sure to pop up. Be it her killer workout routines or...

Devoleena Bhattacharjee Says Nobody Can Take Away Shehnaaz Gill’s Pain

E Desk - October 2, 2021
Sidharth Shukla passed away on 2nd September and his memories are all that his close ones are living with. The one struggling the most...
Facebook Instagram Koo Telegram Twitter
© JaiTV
MORE STORIES