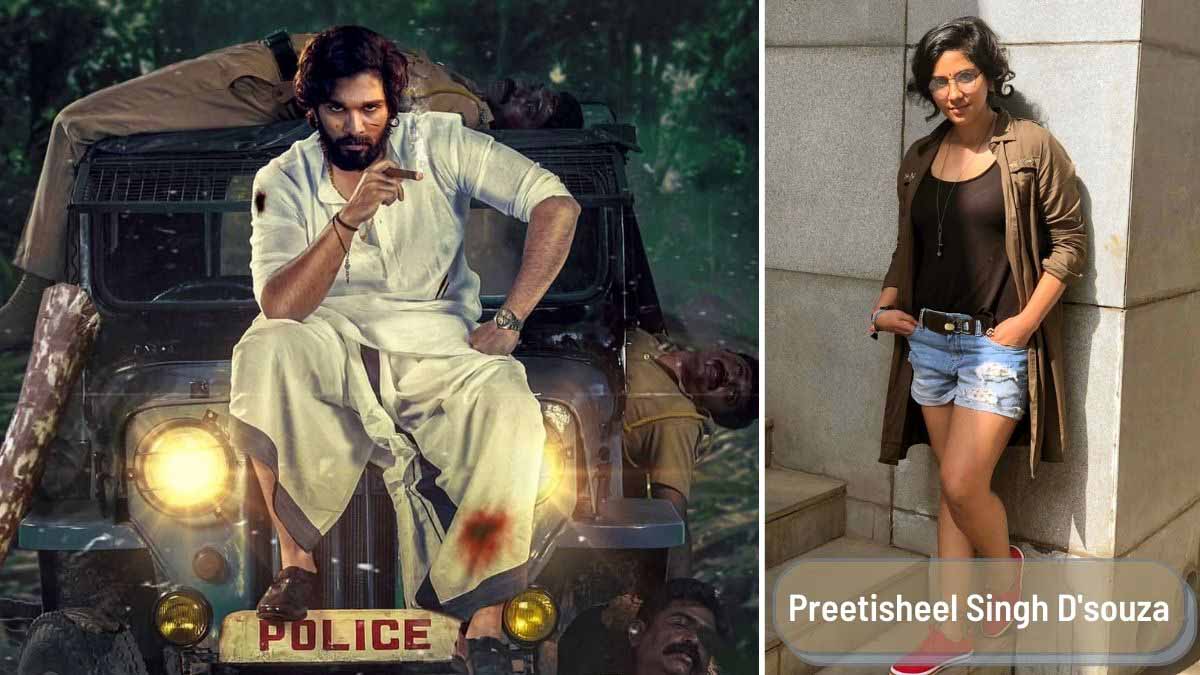 Character designer Preetisheel Singh D’souza is one hell of an achiever. As if Bollywood megahits like Padmaavat, Housefull 4, Chhichore and the South blockbuster Master were not enough, the hair, makeup and prosthetic wiz has once again stunned us with her work in Southern actor Allu Arjun-starrer Pushpa: The Rise – Part 1.

In the first of two cinematic parts, the film’s plot is based on the red sanders smuggling in the Seshachalam Hills of the Rayalaseema region of Andhra Pradesh. The look Preetisheel has designed for Allu Arjun has held not only her fans, but even her detractors spellbound.

The scruffy hair, the dark skintone, thick eyebrows and an unkempt-looking beard — all goes so very well with the carefree rustic character. It all adds to the feel of the raw intensity action role he is playing in Pushpa. The Icon Star, as he is famously called, Allu Arjun carries off the intense character with ease. And that is clearly visible in the recent song Jaago Jaago Bakre which has come up on YouTube.

Anyone who has heard and seen this number and the frenzy that it is building up, knows that Pushpa is on its way to get a thunderous box-office initial.

The first part of Pushpa is scheduled to release in December 2021, with the second part in 2022, in Telugu along with dubbed versions in Hindi, Malayalam, Tamil and Kannada languages. Written and directed by Sukumar, the film co-stars Fahadh Faasil and Rashmika Mandanna, while the music is composed by Devi Sri Prasad.

Meanwhile, Preetisheel is currently working on her forthcoming projects like Sanjay Leela Bhansali’s Hiramandi and South star Vikram-starrer Cobra, while Bhansali’s Gangubai Kathiawadi and YRF’s Bunty Aur Babli 2 are readying for release soon. The rest of 2021 and even 2022 looks glorious for this makeup and prosthetics supertalent.

Social Desk - March 25, 2013
Nitish Kumar is an Indian politician. He belongs to a socialist class of politicians. He is the present Chief Minister of Bihar, India, since...

News Features - November 13, 2021
The future of fashion is here. The beginning of 2022 will mark the launch of a multinational apparel marketplace called Zaffori. The platform aims...